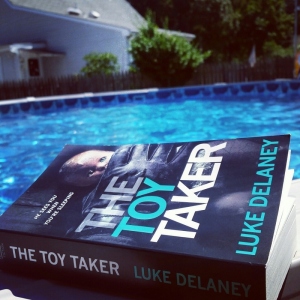 source: free copy via HarperCollins in exchange for my honest thoughts
title: The Toy Taker (D.I. Sean Corrigan #3)
author: Luke Delaney
pages: 530
first line: The street was quiet, empty of the noise of living people, with only the sound of a million leaves hissing in the strong breeze that intensified as it blew over Hampstead Heath in north-west London.
published: 2014 UK/ July 28, 2015 US
rated: Chilling and Suspenseful

Blurb:
Description: Your child has been taken…

Snatched in the dead of night from the safety of the family home. There’s no sign of forced entry, no sign of struggle, and no one heard or saw a thing.

DI Sean Corrigan needs to find four-year-old George Bridgeman before abduction becomes murder. But his ability to see into dark minds, to think like those he hunts, has deserted him – just when he needs it most.

As he investigates, another child vanishes — and still no trace. What kind of monster is Corrigan hunting? And will he work it out in time to save the children?

My thoughts:
I have to start my review by saying that The Toy Taker is a fast paced crime thriller that had me on the edge of my seat. I actually have The Keeper, which is the second in the series, but I did not realize it until I was already immersed in this one.

As the book opens, we get inside the kidnappers head as he breaks into the home of an affluent couple in London and kidnaps four-year-old George Bridgeman while the family is asleep.
His mother doesn’t realize her son is missing until the next morning. There is no sign of forced entry or of a struggle and police are stumped as to who entered and exited the house without leaving a trace.

Just when Detective Corrigan thinks he has the person who did it in custody, another child is taken and Corrigan and his team find themselves at square one again with time running out.

As the story flows you get alternating POV’s of different characters. I found this worked particularly well here because as the police work the case, find different leads and uncover clues, it feels like you are in on the investigation as well.

I liked Sean Corrigan from the start, he’s meant to be a detective, thrives on the hunt for bad guys and wants to help the victims. He’s a multi faceted character as he struggles to juggle home life with working long, stressful hours. I like the London/Scotland Yard backdrop and found this one to be a gritty, suspenseful read.

I had my concerns about reading a book revolving around children being kidnapped and possibly abused because that is not subject matter I read. I figured I would have to skip a few passages if anything got too detailed, which I did. My skipping parts was more towards the latter half of the book as a third child is taken and the investigation continues.

The side characters added to the intensity of story, like the sets of parents and their reactions to their children being taken as well as how they treated the cops. Corrigan’s team are trying everything they can to catch the kidnapper and he himself is under intense pressure as the clock ticks. On top of that, the case gathers alot of public attention as the media reports on it.

As I mentioned, this installment is the third in the D.I. Sean Corrigan books and it can be read as a standalone but I would rather have read at least the prior book in the series. There are references to what has happened previously especially concerning a case Corrigan has worked on and the way it may be affecting his thinking about this current case. Other characters like detective Sally and a doctor named Anna both have backstories in the previous books that seem to have carried over here and while I wasn’t lost while reading, I would have liked to know more. Corrigan reflects on the demons in his own past.

He is known for being able to connect himself to the scenes of the crime and has the ability to kind of get inside the criminals minds and he uses this formula to help solve cases.

The sudden silence in his head was matched by the silence in the cemetery as he started at the words on the headstone, an idea germinating slowly in his mind, like a shattered mirror reflecting a thousand different images, all different, but somehow part of the same picture, until at last they came together to form a solid pattern.
p.364, The Toy Taker (D.I. Sean Corrigan #3) by Luke Delaney

I found that Luke Delaney has a knack for creating suspense and for revealing layers of the story slowly enough to keep you drawn in and guessing. The author has a background as a police officer and his knowledge on procedures and the investigation is evident. There is a bit of a twist as far as who took the children and I hoped the kids would be brought back safely. I myself did not figure out who did it, until I began to read the story from the kidnappers POV.

Overall, a thrilling and suspenseful book that had me hooked.

Author Info: Luke Delaney joined the Metropolitan Police Service in the late 1980s and his first posting was to an inner city area of South East London notorious for high levels of crime and extreme violence. He later joined CID where he investigated murders ranging from those committed by fledgling serial killers to gangland assassinations.

Disclaimer: This review is my honest opinion. I did not receive any kind of compensation for reading and reviewing this book. I am under no obligation to write a positive review. My free review copy of The Toy Taker (D.I. Sean Corrigan #3) by Luke Delaney arrived via HarperCollins.
The book photo above is my own and is not to be removed from this post.