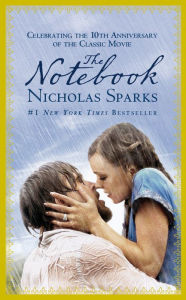 Blurb:
Every so often a love story so captures our hearts that it becomes more than a story-it becomes an experience to remember forever. The Notebook is such a book. It is a celebration of how passion can be ageless and timeless, a tale that moves us to laughter and tears and makes us believe in true love all over again…

At thirty-one, Noah Calhoun, back in coastal North Carolina after World War II, is haunted by images of the girl he lost more than a decade earlier. At twenty-nine, socialite Allie Nelson is about to marry a wealthy lawyer, but she cannot stop thinking about the boy who long ago stole her heart. Thus begins the story of a love so enduring and deep it can turn tragedy into triumph, and may even have the power to create a miracle…

My thoughts:
Let me start my review off with a *sigh*.
Sigh.

I have shied from reading The Notebook

for many years only because I like the movie so much. I felt like the novel would never live up to the movie.

is Nicholas Sparks’ first book. When I started reading, I found the story progressed quickly. Early on Allie is visiting Noah after fourteen years of separation and while she is engaged to Lon. Their reunion was really sweet and I am a sucker for love reunited. The two reminisce about their summer together all those years ago and they catch up on what has happened since they last saw each other.

While the book and the movie differ in a few ways, they are pretty much the same. I wanted to read my favorite lines :”She had come back into his life like a sudden flame, blazing and streaming into his heart. Noah stayed up all night contemplating the certain agony he knew would be his, if he were to lose her twice….” But, alas it wasn’t to be, those lines are solely in the film version as were a few other favorites. 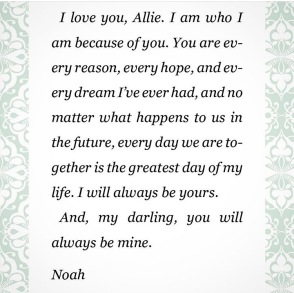 I like Noah’s character very much. He is a strong hero, quiet and poetic. Whats not to like? In the novel you really see that he is a lover of poetry and melts Allie’s heart with the way he speaks to her. His being poetic is one of the reasons she falls in love with him. I also enjoyed the beautiful love letters he writes to her.

“A living poem” had always been the words that came to mind when he tried to describe her to others.
p.31

While I enjoyed the novel, the film version is still my favorite. It was nice however to finally read the book. I did get teary eyed towards the end even though I knew what was going to happen and seeing it through Noah’s eyes got me.

Author Nicholas Sparks has a way with words and the sweet romances he pens tend to whisk me away very easily. He has got such a great handle on writing romances and love stories that are heartfelt. The Notebook is a favorite, right up there with Nights in Rodanthe

and Message in a Bottle

Noah watched her from the corner of his eye. God, she’s beautiful, he thought. And inside, he ached.
p.46

Nicholas Sparks is one of the world’s most beloved storytellers. All of his books have been New York Times bestsellers, with over 100 million copies sold worldwide, in more than 50 languages, including over 65 million copies in the United States alone.

Sparks wrote one of his best-known stories, The Notebook, over a period of six months at age 28. It was published in 1996 by Warner Books.

———-
Disclaimer: This review is my honest opinion. I did not receive any kind of compensation for reading and reviewing this book. I am under no obligation to write a positive review. I purchased my copy of The Notebook by Nicholas Sparks.

11 thoughts on “The Notebook by Nicholas Sparks”