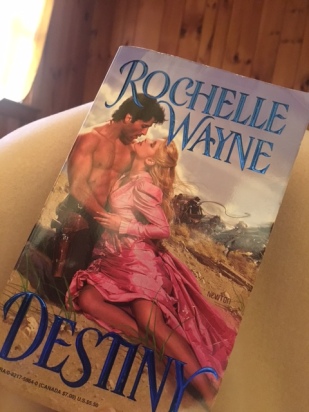 blurb:
Fleeing for her life, Sharla shamelessly embraced the role of a fallen woman. To escape town, she tricked Lance Slade into escorting her to Texas. But she learned the truth about the sexy bounty hunter too late. With Sharla, Lance found a searing passion that tested his resolve as a lawman. If only Sharla could convince him of her innocence–and Lance could learn to trust her. Only then could they find true love together.

my thoughts:
I read Destiny

last week while on vacation by the cabin at the lake and it was the perfect quick, mindless summer read. I mean that in a good way. My daughter and I went into a used book shop in town and we found copies of Destiny

and Beneath A Western Moon

by the same author. We quickly co-read the former. The books are both in great condition for being published in the 90’s. I’ve tried finding out who author Rochelle Wayne is, but no luck. There is no website connected to her and I’m assuming she wrote under a pseudonym. Anyway, Destiny

has everything good Harlequin romance should have. Hero and heroine who initially dislike each other but eventually fall in love, a few minor subplots in the mix, a couple of plot twists and turns and a nice dose of bodice ripping on top of it all. Plus, it is set in the 1800’s West which was nice.

Orphaned Sharla Matthews has been raised by her guardian Olivia, who has passed away. Olivia was wealthy and raised Sharla as her own, leaving her an inheritance for when she turns twenty-one. Olivia is about six months shy of her birthday so she figures she will leave town for six months, return when she’s twenty-one, claim her inheritance and buy a ranch and live on the farm the rest of her life. James Rayfield is Olivia’s widower and plans on marrying Sharla and taking her inheritance. He resents Sharla but also wants to get her into bed, so it’s a win-win for him. Sharla cannot stand James and does not want to be under the same roof with him any longer. When James winds up dead, via letter opener, Sharla is blamed. Yes, he’s killed with a letter opener. This is my one single qualm with this book. I’m pretty sure stabbing someone to death with a letter opener would be very difficult. One of the characters in the book even questions it, so I don’t know why the author couldn’t have made the murder weapon a knife. It would have been so easy to change it to a knife.

Anyway,  enter Madam Maxine, who happens to run the local brothel and wants to help Sharla. She gives her a false identity as a lady of the evening, and sends her off to Texas with bounty hunter Lance Slade. Lance has no idea he’s helping a wanted woman at first and as the plot thickens, the two fall in love.

Meanwhile, back at home, James brother Dexter is hell-bent on finding Sharla and having her hang for allegedly killing his brother. He happens to find love unexpectedly with another plot twist. Maxine is trying to find out who really murdered James so that Sharla can be cleared. I like Maxine’s character from the start, she’s a smart business woman and we get some of her back story. The real murderess is trying to cover her tracks and make sure Sharla hangs instead of herself. There are also a few other side characters added to the mix as Lance and Sharla are on the run. We learn that Lance’s family was murdered five years ago and he is intent on hunting down the killers. This is the main issue over his and Sharla’s relationship. He wants revenge and can’t commit to love until he gets it.

In a way, she was his lifeline. For the past five years, he had merely been existing. He had turned his back on life and had lived only for revenge. The night his family was murdered, he had fallen into a dark abyss, and was hopelessly entrapped in its endless pit. Hate, retribution, and violence were trapped in there with him.
p.301, Destiny by Rochelle Wayne

The slow burn between Lance and Sharla was nice and I liked them together. The plot twists kept coming and the book moves at a fast pace. There is alot going on here, while these two are on the run, but it didn’t overwhelm the storyline, it added to it. It’s a fun read. There was love, fugitives on the run, revenge, family drama, and murder woven in nice and neatly. And of course, the happily ever after.

Yesterday was gone and tomorrow as a blur on the horizon. The night, this moment, was time eternal.
p.255, Destiny

Like I said, it was the perfect mindless summer romance. My daughter enjoyed it too and it was fun discussing as we read. This was her first time reading a bodice ripper and we had a few good laughs over some of the scenes. She thought it was funny how the story moved along so quickly and how so much happens within a few short pages. She said “Everything that happens in this book is a big old coincidence”. She thinks this one should be made into a movie. We both agree Bradley Cooper will play the part of Lance Slade.

++++++++++++++++++++++++++++
Disclaimer: This review is my honest opinion. I did not receive any kind of compensation for reading and reviewing this book. I am under no obligation to write a positive review. I purchased my copy of Destiny by Rochelle Wayne. The photo in this post is my own and not to be removed from this page.

12 thoughts on “Destiny by Rochelle Wayne”