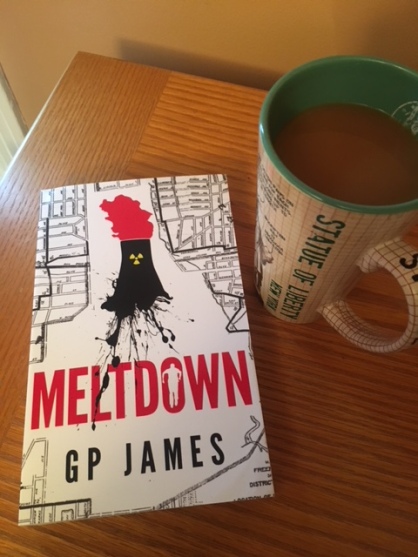 author: G.P. James
published: Wyatt-MacKenzie Publishing (May 15, 2018)
pages: 393
first line: His hazel eyes grazing the dials and gauges on the sage metal walls through the plate-glass window teleported him back to the seventies, making him feel older than thirty-eight, like he had been on the job for that amount of time and was cusping the turn of his sixth decade.
genre: environmental thriller/suspense/action
rated: 4 out of 5 stars

A timely thriller illuminating facts regarding the state of the world’s energy crisis, climate change, and the quandary of nuclear energy–inspired by events in Fukushima, unexpected earthquakes across the planet, and the deterioration of nuclear power plants worldwide.

Bear Mountain Nuclear Energy Center sits one mile outside the active Ramapo fault line, thirty-five miles from the center of New York City. The fault line rocks causing a massive earthquake in the town of Peekskill; power is clipped and control of one of the reactors at Bear Mountain is abruptly lost.

Plant supervisor Trace Crane fights to save the reactor while his wife Avi searches for their daughter in the destroyed Northeast. As the condition of the reactor plummets and radiation is released into the environment, Trace is left to choose between saving the nuclear plant, the East Coast, and the twenty million residents of the NYC metro area or finding his family and saving himself.

by G.P. James was a tense thrill ride that posed many “what if” scenarios. Trace Crane works as an engineer at the Bear Mountain Nuclear Energy Center in upstate NY. He is married to Avi and they have a young daughter named Brooklyn. As the book takes off, Trace is on vacation mode as he is only working half day on this Friday before he heads to Connecticut for the weekend to relax with his family. This morning however the active Ramapo fault line rocks and sets off an earthquake. As a result, the poorly maintained Bear Mountain nuclear plant is now leaking nuclear waste into the environment. Houses are damaged, people are killed and mayhem ensues in the surrounding areas of New York and New Jersey. In a race against time, things go from bad to worse as Trace struggles with trying to do his job and keeping everyone safe or running off to find his family and evacuating.

“No one ever imagined a quake of that magnitude striking the East Coast, except, clearly, the scientists. Seismologists knew something everyone else didn’t-the Ramapo fault zone was a seething leviathan that could explode at any moment. Now it had. Trace experienced the chilling realization that their operating licence shouldn’t have been extended twenty years past the reactor’s design life.”
p.26, Meltdown by GP James

The story goes from Trace to Avi’s POV as disaster continues to unfold. Avi is in a frantic search for her daughter who was at school when the earthquake hit. She is hoping to find her at one of the local hospitals where several of the children were bused off to. Phones are down so she has no contact with Trace.
As the story races on we get flashbacks to when Trace and Avi met in college to the present time and their strained marriage.

“The staleness that had befallen their relationship astonished him. They were a patch of roses that no longer flowered-brown stems, only thorns left.”
p.26, Meltdown by GP James

I enjoyed this one and found the writing and dialogue to be engaging. The alternating POV’s between Avi and Trace gave the story extra tension and build up. I found Meltdown

extra scary because it felt plausible. What if a nuclear plant caused an earthquake and nuclear waste started to leak into the environment? It could happen. As the story unfolds Trace argues the positives of nuclear energy, while Avi is more against it having grown up near a nuclear reactor and having suffered cancer and a thyroid condition which she believes is a result of it. Once all hell breaks loose there are nuclear particles raining down on the surround areas. In the midst of all this mayhem is a little family who are trying to reunite and flee to safety.

“They were far from an evacuation as long as the release didn’t multiply exponentially and the projections were accurate. At worst residents would be asked to stay inside. Millirem is nothin’. People panic based on ignorance. Fear grows, spreads, pervades.”
p. 121, Meltdown by GP James

I’ve been to Bear Mountain many times for hiking and picnicking, they also have a little zoo there and we’ve taken trips out many times over the years, it’s a favorite place in the Summer and Fall months. I took the photo below a few years ago of the view at the top of the mountain. 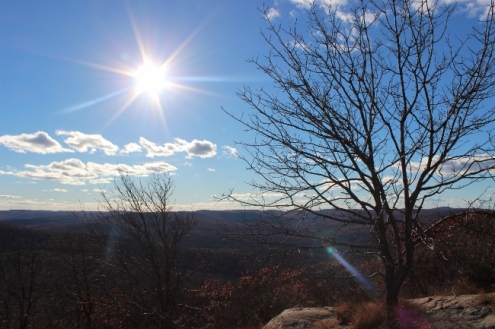 When I googled to see if there was a nuclear plant there like in the book I found articles like this one from 2016. Like I mentioned this book poses many “what if” questions. The New York and New Jersey settings were written well, I could easily envision the streets of NYC and the subway and the crowds of people. Avi and Trace are likable characters and as the story flows you care about what happens to them. I also felt that the author did his research especially for a story that centers around a protagonist who is a nuclear engineer. I recommend Meltdown

by G.P. James if you are looking for a good environmental thriller revolving around the pros and cons of nuclear energy.

“The wind was blowing iodine, cesium, strontium, and plutonium over them, sending it all silently into their bodies. Even with the windows and vents shut isotopes would penetrate the vehicles to some degree.”
p.348, Meltdown by GP James

disclaimer: This review is my honest opinion. I did not receive any kind of compensation for reading and reviewing this book. I am under no obligation to write a positive review. I received my free ARC of Meltdown

by G.P. James via Meryl Moss Media.
Some of the links in the post are affiliate links. If you click on the link and purchase the item, I will receive a small affiliate commission. The photos in this post are my own and not to be removed from here.

16 thoughts on “Meltdown by GP James”