author: Christine Brae
published: Vesuvian Books (August 28, 2018)
first line: The only benefits of travelling a gazillion miles a year is the braided cord separating those with preferred airline status from the rest of the passengers.
pages: 279
rated: 3 1/2 of out 5 stars

blurb:
One universe, nine planets, 204 countries, 809 islands and 7 seas, and I had the privilege of meeting you.”

When Tessa Talman meets Simon Fremont for the first time, not only is she attracted to him, she’s intrigued by how different their lives are. He’s a dedicated scientist, practical, pragmatic, and grounded—while she’s a head-in-the-clouds romance author. As their relationship grows, they agree to meet in places around the world, while continuing to live on opposite sides of the globe.

Though their feelings for each other deepen, their priorities remain the same. Simon is in a hurry to be financially sound and settle down, but Tessa is enjoying her freedom and newfound success. Neither is willing to give in, but as each goodbye gets harder, Tessa begins to wonder whether fame is the path to happiness, or if she has everything she needs in Simon.

Just as Tessa finds the courage to go after her own happily ever after, the unthinkable happens, separating them in ways they never imagined.

To move forward, she must let go of the past, and determine once and for all if love is truly more powerful than the pain of goodbye.

by Christine Brae was nice contemporary romance. Tessa is a successful romance author and she meets Simon on a plane. He is a scientist and the two start to keep in touch via Twitter and What’sApp for a few months. Simon flies out to visit Tessa on one of her book singing tours to spend some time with her. One thing leads to another and these two have great chemistry and begin a long distance fling, but each is trying to not get too attached.

“Every goodbye served only to increase the intensity of his feelings for her.”
-p. 173, Eight Goodbyes by Christine Brae

I liked both these characters. I enjoy books about books and writers, so Tessa’s character was easy to like. She did however do something that I definitely thought was super inconsiderate at the start of the story but Simon, being awesome, looks past it and still wants to get to know her so that was sweet. Speaking of Simon, he is a good-looking scientist, what is not to like about that? I thought it was cute that he doesn’t do online anything, he doesn’t have Twitter or Facebook or WhatsApp but he gets these apps to be able to contact Tessa. He follows her on Twitter and as the two start to chat on WhatsApp daily their romance blossoms from there.

Like the title says, Simon and Tessa keep saying “goodbye” after they first meet on the plane, but they know they have something special so they keep trying to see each other. The story revolves around how to maintain their long distance romance and Tessa’s fear of committing and post-traumatic stress disorder plays a part of the story-line as well. Simon is more the one who is willing to tell her he loves her, while Tessa is more the one who is terrified of getting hurt and who doesn’t want to put her career on hold and settle down just yet. As the story flows, you see these two say goodbye with hopes of seeing each other again, because of course, love conquers all. 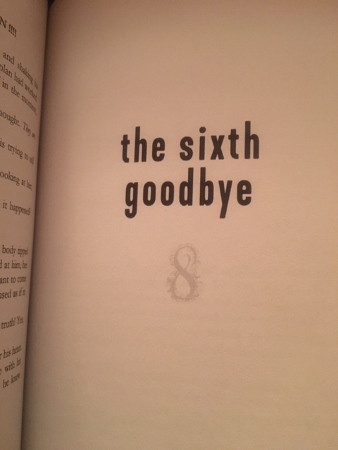 The relationship issues these two faced made this a realistic read. Tessa’s favorite movie is An Affair To Remember. That’s one of my favorite classics. I enjoyed seeing it mentioned here. While I enjoyed Eight Goodbyes

, the writing was good, the characters were well-developed and the story-line moved along nicely, I did have a few qualms with it. I know this is romance, but some of the dialogue was cheesy and I hate to say it, the story became a little overly dramatic for my tastes. The author wrote the PTSD in well and the extra drama I’m talking about has nothing to do with post traumatic stress.

Although, I felt like there was alot of drama especially towards the end of the book it does all wrap up nicely and you get the HEA. The first half of the story was a little bit slow going but then the latter half was busier and I started to wonder if it would end with a cliffie but it didn’t.

“My God Tessa, do you know what you did to me? You turned me from someone who’d taken love for granted to someone who was hopelessly in it. My actions, my words, never have I ever been that way with another person. You showed me what it was like to truly live.” -p 236

This is my favorite quote in the book and sums it all up nicely:

“Love isn’t like the atoms you work with to manipulate surfaces and things, love just happens. And when it does, there’s no guarantee that it’s forever.”-p.78

was solid contemporary romance, a nice beach read if you don’t mind a little extra drama in the mix and a hero who wears his heart on his sleeve. I’m more about the brooding heroes with grumpy attitudes who melt later on because the heroine shows them what love is but I can always appreciate a softie like Simon. Anyway, I love the cover lots. 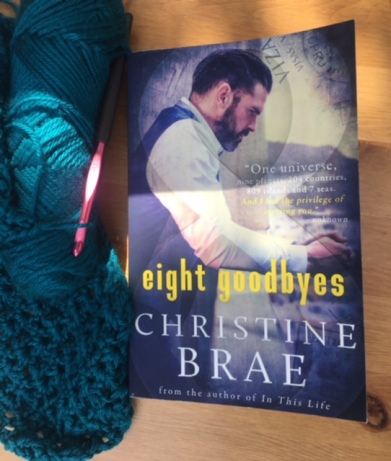 And, speaking of long distance love, what do you think? Do these relationships work out? Have you ever been in a long distance relationship? I feel like they can really work nowadays with us all being so connected via our phones and being able to text and Face-time whenever we want like Simon and Tessa did in the story.

disclaimer: This review is my honest opinion. I did not receive any kind of compensation for reading and reviewing this book. I am under no obligation to write a positive review. I received my free ARC of Eight Goodbyes

Some of the links in the post are affiliate links. If you click on the link and purchase the item, I will receive a small affiliate commission.