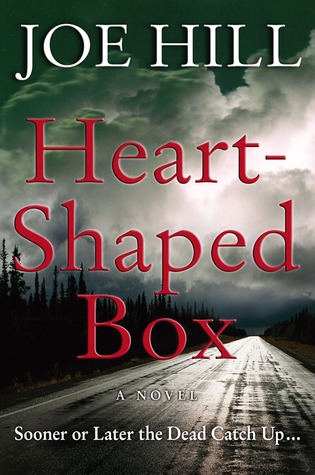 I won’t go into any more details so not to spoil the plot, also don’t read the blurb because it contains a spoiler. I cut off the spoiler in the blurb above though.

was a great scary re-read. I had forgotten much of the plot so it was like reading it for the first time. Hill has a way of telling a good ghost story and giving his characters depth. I was very creeped out while reading and the idea of this ghost arriving within a suit is scary enough. I do believe objects can be haunted, not in the particular way the suit was haunted for this story but still.

Judas was an interesting character, he’s a rock star so there are music references throughout the story which was a nice touch. I’m pretty sure the title is a reference to the Nirvana song of the same name.

Also, I like the dynamic between Judas and Georgia. She loves him and he loves her as best as he can. Judas is divorced and has a habit of having short lived relationships with younger women but Georgia is different. She doesn’t give up on him and she knows his issues.

The ghost was so creepy especially the way he would just sit there and how his eyes were alive with black scribbles. Trigger warning that there is animal violence at one point and I hate that, especially when it comes to dogs.

Joe Hill is one of Stephen King’s sons and he has definitely proven himself to be a wonderful storyteller his own right. The apple does not far from the proverbial tree in the King family. It’s nice. I’ve read Hill before with 20th Century Ghosts and Strange Weather and have enjoyed his work. I also read a short story by these two and I hope they collab on a full length novel one day. One can only hope.

Ever since the suit had arrived at his house in its black heart-shaped box, he had sensed the dead man lingering close to him.
-p.150, Heart Shaped Box by Joe Hill

disclaimer: This review is my honest opinion. I did not receive any kind of compensation for reading and reviewing this book. I am under no obligation to write a positive review. I purchased my copy of Heart Shaped Box by Joe Hill. Some of the links in this post are affiliate links.