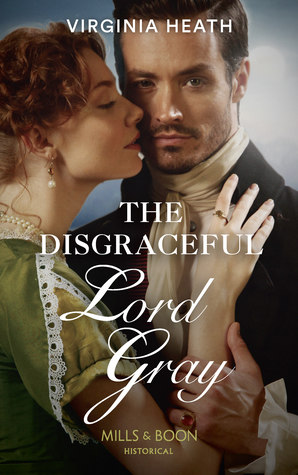 author: Virginia Heath / Twitter
genre: historical romance/espionage
pages: 288
published: March 21st 2019
first line: There was no doubt about it.
rated: 4 out of 5

blurb:
A spy on a mission…

Until he meets this heiress!

Part of The King’s Elite. Miss Theodora Cranford’s learned to keep her impetuous nature locked away. She won’t be deceived by another man who can’t see past her fortune. She wants an honourable, sensible sort – not a self-assured scoundrel like her new neighbour, Lord Gray. Although she’s sure there’s more to him than meets the eye… But after that first captivating kiss, she’s certainly left wanting more!

by Virginia Heath was entertaining historical romance with a blend of intrigue, mystery and a dash of humor.

Miss Theodora Cranford is a twenty-three year old heiress who lives with her uncle and his wife. She has her guard up around would be suitors because most men want her for her money. Lord Graham Chadwick a.k.a. Gray is a member of the King’s Elite who is on the hunt for a smuggling ring. This quest brings him to Thea’s home because he suspects her uncle is the ring leader. Gray has had a rough past, ten years ago he was betrayed by his father, his brother and his first love and as a result he gambled away his inheritance. This is something he has never fully gotten over. Since then he has had affairs with ladies but never taken any seriously. Now working as a spy he is hoping to get a promotion if he takes down the smuggling ring.

Thea and Gray are trying instantly attracted to each other although they try to fight it. Neither trusts anyone enough to allow themselves to get too close. As Gray tries to find the smuggling ringleader, he can’t help fall for Thea and vice versa. The two make a truce to become friends, but they secretly want more. Gray is part of the King’s Elite and he is torn between his work and his feelings for Thea. He is on a mission but is definitely side tracked by her.

Everything about this novel was entertaining and there wasn’t a dull moment. I liked that Thea’s best friend Harriet is 30 years older than her and a flirty widow who wants Thea to loosen up. The mystery aspect was good and I didn’t guess who the head of the smuggling ring was but it made sense when I found out.

Thea and Gray’s first encounter was unforgettable because Gray was skinny dipping. Several scenes throughout had me giggling as there was nice mix of humor woven into the story.

“For the first time in her life, Thea had no words at all. Her cheeks were glowing scarlet and it took all her strength to stop her eyes wandering back to where they had just feasted, making her blink and gape like a hooked fish.”

The chemistry and tension were great between Gray and Thea and I could not wait for them to get together. I liked seeing the slow burn and that they got to know each other better first. Thea gets him to open up about his past and much of the story-line revolves around these two learning to trust again and taking a chance on love.

“True love is the greatest joy in the world and worth all the hideous turmoil in the long run.”
95% kindle, The Disgraceful Lord Gray by Virginia Heath

Speaking of Gray, favorite hero alert. He’s got a cute dog that he named Trefor after a place in his hometown, of course, because he’s sentimental that way. Also, Gray has some great wisdom to share throughout the story. The writing just pulled me right in.

“Life was too short to ponder what might have been. If it was meant to be, it would have happened. It was a simple as that. There was no point lamenting the fickle finger of fate or wasting time being angry or crippled by remorse.”- 3% kindle, The Disgraceful Lord Gray

“It was always much easier to orchestrate your own downfall, on your terms, than have another tell you, yet again, that you didn’t quite measure up-despite all your best attempts to convince them otherwise.
-44%, kindle, The Disgraceful Lord Gray

The book has romance, drama, some humor and a little spy mystery and Gray has an adorable dog, what more could you want? The Disgraceful Lord Gray (The King’s Elite Book 3)

is book 3 in The King’s Elite series but works perfectly fine as a stand alone. Fantastic storytelling by Virginia Heath and this was my first time reading this author but hopefully not my last. I read the last page with a smile on my face. Finally, great book cover also.

about the author:
When Virginia Heath was a little girl it took her ages to fall asleep, so she made up stories in her head to help pass the time while she was staring at the ceiling. As she got older, the stories became more complicated, sometimes taking weeks to get to the happy ending. Then one day, she decided to embrace the insomnia and start writing them down. Fortunately, the lovely people at Harlequin took pity on her and decided to publish her romances, but it still takes her forever to fall asleep.

If you want to find out more check out virginiaheathromance.com or follow her on Twitter @VirginiaHeath_ -quoted from Amazon

++++++++++++++++++++++++++++
Disclaimer: This review is my honest opinion. I did not receive any kind of compensation for reading and reviewing this book. I am under no obligation to write a positive review. I received my free review copy of The Disgraceful Lord Gray from Rachel’s Random Resources in exchange for my honest thoughts.
Some of the links in the post are affiliate links. If you click on the link and purchase the item, I will receive a small affiliate commission.