When Henry Swann is asked by his quirky partner, Goldblatt, to find a missing psychic who’s swindled his ex-wife out of a small fortune, he just can’t say no. Although he doesn’t actually expect to get paid, he figures it might give him a chance to finally learn more about his partner’s mysterious past. His search takes him into the controversial, arcane world of psychics, fortunetellers, and charlatans, while raising questions in his own mind about whether or not there is an after-life.

While working his partner’s case, he’s approached by a former employer, attorney Paul Rudder, to track down a missing witness who might be able to provide an alibi for his client, Nicky Diamond, a notorious mob hitman who’s scheduled to go on trial for murder he claims he didn’t commit in a week. Swann’s search for the missing witness, who happens to be the defendant’s girlfriend, takes him from Brooklyn to a small beach town across the Bay from Mobile, Ala. But what does she really know and will she even come back with him to testify for her boyfriend?

Praise for Swann’s Down:

“Psychics, double-crosses, missing persons—Charles Salzberg’s latest Henry Swann book has it all. Swann’s Down is a gritty, no-frills PI novel that brings to mind greats like Reed Farrel Coleman’s Moe Prager and Michael Harvey’s Michael Kelly. Whether this is your first Swann adventure or the latest, you won’t want to miss the brass-knuckle punch that is Swann’s Down. Trust me.”
— —Alex Segura, author of Blackout and Dangerous Ends

Swann’s Down gives readers two intriguing mysteries for the price of one, as skip tracer Henry Swann pursues a woman who might alibi a murderer and a psychic who swindled the ex-wife of Swann’s partner. Shamus Award-nominated Salzberg does a superb job cutting between the two investigations. I kept turning pages to stay with both chases as the suspense increased to the very end. Whatever is going on, Swann is at the center of this story. His wry wit, quotes from authors and philosophers, genius for questioning suspects, and dark past make him a character readers will follow anywhere as he seeks his quarry. This is another thrilling addition to this excellent series.
— Rich Zahradnik, Lights Out Summer, winner of the 2018 Shamus Award for Best Paperback Private Eye Novel

Henry Swann dives in where others fear to tread in Swann’s Down: Fast. Funny. And Smart. This time out, Swann crosses paths with a psycho hitman, a phony psychic and Swann’s mysterious partner, a disbarred lawyer. Who could ask for more? I hope we’ll see a lot more of Swann in the future and that this isn’t Swann’s swan song.
— Paul D. Marks, Shamus Award-winning Author of White Heat and Broken Windows.

Today I am posting my thoughts on Swann’s Down by Charles Salzberg . This crime thriller caught me by surprise as I finished it in one sitting.

END_OF_DOCUMENT_TOKEN_TO_BE_REPLACED

The Sunday Post is a weekly meme hosted by Kimba @ Caffeinated Book Reviewer. It’s a chance to share news. A post to recap the past week, showcase books and things we have received and share news about what is coming up for the week on our blog…
Mailbox Monday is the gathering place for readers to share the books that came in their mailbox during the last week. Warning: Mailbox Monday can lead to envy, toppling TBR piles and humongous wish lists….

Hello all and happy weekend. I took a month long unexpected blog break but am catching up a little this weekend. I have missed you all. Life has been busy, both my kids had birthdays these past few weeks and work keeps me busy as does life in general. I  know you can all relate to that. And lately the nicer weather has kept me outdoors in my free time so blogging tends to take the back seat. Most afternoons after work have been spent out in my yard reading and relaxing or crocheting in bed watching movies and shows. Our pool is open but I still haven’t gotten it, the weather has been warm but it needs to be really hot for me to go in. I did read a book, a big one too, over 500 pages and my review is up for Doctor Sleep .

Also wishing the dad’s a very Happy Father’s Day today. Yesterday was spent at a Father’s Day BBQ with family so that was really nice. One of the guests was 98 years old and we enjoyed chatting with her and hearing her stories. She was telling us how she was traveling to Russia when Chernobyl happened. And that she has volunteered with her church’s food bank for the past 22 years and still does! She said they take her there a few days a week she and sits in a chair and helps place the food on the plates for the homeless. And that she obtained her science degree and she is the last living founding member of a women’s group from Brooklyn who recently sought her out to honor her and she met Mayor de Blasio at the ceremony. She brought the ceremonial booklet and honorary sash with her to show everyone. Founded in 1954 the group has grown and has chapters in several states including California. I could go on and on about the chat I had with her. Amazing and inspiring. I could hardly believe she was 98. God bless her.

Onto my bookish updates…

END_OF_DOCUMENT_TOKEN_TO_BE_REPLACED 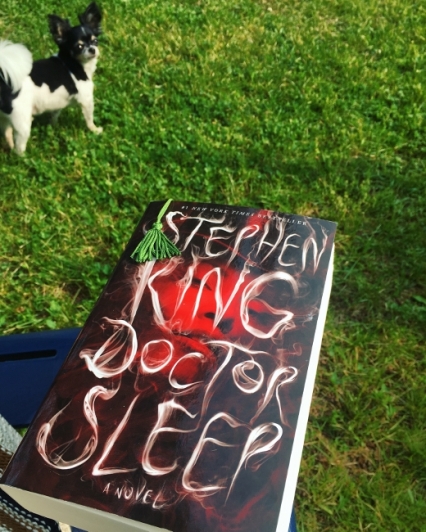 author:Stephen King
pages: 531
published: 2013
genre: paranormal horror
first line: On the second day of December in a new year when a Georgia peanut farmer was doing business in the White House, one of  Colorado’s great resort hotels burned to the ground.
rated:  5 stars

blurb:
On highways across America, a tribe of people called The True Knot travel in search of sustenance. They look harmless—mostly old, lots of polyester, and married to their RVs. But as Dan Torrance knows, and tween Abra Stone learns, The True Knot are quasi-immortal, living off the “steam” that children with the “shining” produce when they are slowly tortured to death.

Haunted by the inhabitants of the Overlook Hotel where he spent one horrific childhood year, Dan has been drifting for decades, desperate to shed his father’s legacy of despair, alcoholism, and violence. Finally, he settles in a New Hampshire town, an AA community that sustains him, and a job at a nursing home where his remnant “shining” power provides the crucial final comfort to the dying. Aided by a prescient cat, he becomes “Doctor Sleep.”

Then Dan meets the evanescent Abra Stone, and it is her spectacular gift, the brightest shining ever seen, that reignites Dan’s own demons and summons him to a battle for Abra’s soul and survival. This is an epic war between good and evil, a gory, glorious story that will thrill the millions of hyper-devoted readers of The Shining and wildly satisfy anyone new to the territory of this icon in the King canon.

my thoughts:
Hello all, I am still here and after taking a few weeks off blog-land I figured I’d come back with my thoughts on Doctor Sleep

which is the sequel to The Shining

. I first read The Shining

over a decade ago, when I was finally brave enough to. So when Doctor Sleep

was published in 2013, I re-read The Shining in order to refresh my memory before picking up this sequel. Meanwhile, here I am finally reading the sequel six years later. Did The Shining need a follow up? Not really because it had an ending. But I was still curious to see where King would take the story. In an interview I heard him say that Doctor Sleep is a sequel to The Shining novel, not a sequel to the film since the two are different in many ways and he didn’t like the film version.

END_OF_DOCUMENT_TOKEN_TO_BE_REPLACED

Bookworm has
read 9 books toward
her goal of
30 books.