Good morning everyone. Please join me in welcoming Elizabeth Hazen as she stops by today to chat. There is also a link towards the end of the post to where you can enter to win a copy of her book. But first, here are the details about her latest collection, Girls Like Us….
Book Synopsis:
Girls Like Us is packed with fierce, eloquent, and deeply intelligent poetry focused on female identity and the contradictory personas women are expected to embody. The women in these poems sometimes fear and sometimes knowingly provoke the male gaze. At times, they try to reconcile themselves to the violence that such attentions may bring; at others, they actively defy it. Hazen’s insights into the conflict between desire and wholeness, between self and self-destruction, are harrowing and wise. The predicaments confronted in Girls Like Us are age-old and universal—but in our current era, Hazen’s work has a particular weight, power, and value.

END_OF_DOCUMENT_TOKEN_TO_BE_REPLACED

Lilian and the Irresistible Duke

A reunion in Rome…Sparks an affair to remember!

Responsible widow Lilian Fairclough is persuaded to travel to Rome for a hard-earned break and to let down her hair! She’s surprised to be reunited with passionate, cynical Italian duke, Pietro Venturi. He reawakens her sensual side and intrigues her with glimpses of pain beneath his rakish surface. Enticed into a secret and temporary affair – what will happen once she returns home?

Lilian and the Irresistible Duke is book 4 in Virginia Heath’s Secrets of a Victorian Household series. I have not read the previous books in this series, but this reads fine as a stand alone.

Lilian Fairclough is a 45 year old mother and widow who a few months prior in the previous book in this series shared a passionate kiss during a carriage ride with Italian duke Pietro Venturi. She is now on her way to Rome for a vacation. Her adult children are happily married and they wanted her to get a way for a while and relax. She goes to Rome with her cousin to stay with a friend for several weeks. Little does she know she will run into the tall, dark and handsome Pietro Venturi while on her vacation.

END_OF_DOCUMENT_TOKEN_TO_BE_REPLACED

*Happy Halloween! This is a scheduled post for the The Journals of Octavia Hollows  blitz and giveaway* I listened to this one on audio recently, my thoughts are here. Read on for details about the books and for a chance to enter to win your own signed copy…

Do you like urban fantasy and snarky heroines? Then you’ll want to meet necromancer Octavia Hollows and her sidekick Bacon. 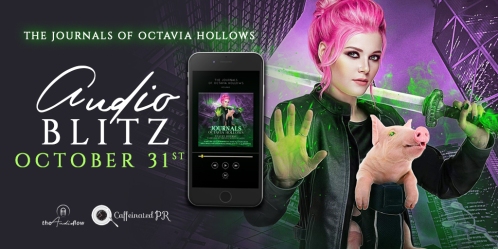 END_OF_DOCUMENT_TOKEN_TO_BE_REPLACED

blurb:
Haunted by Penny Penhurst’s courage on the witness stand, meticulous barrister Lord Hadleigh offers her a housekeeper position at his estate. Despite trying to stay detached, Hadleigh is charmed by her small child and surprised by how much he yearns for this proud woman! Can this he break through his own – and Penny’s – barriers to prove he’s a man she can trust…and love?

My first time reading Virginia Heath was this past April when I read The Disgraceful Lord Gray . I really enjoyed the writing and the slow burn romance so when I had a chance to read another installment in the King’s Elite series I jumped at the chance. The Determined Lord Hadleigh is book 4 and the final one in the series but reads fine as a stand alone.
In this last installment Lord Tristan Hadleigh member of the King’s Elite, is a barrister who is working as prosecutor on the case against a smuggling ring. All the smugglers are now standing trial including Penny Penhurst’s husband, Viscount Penhurst. Penny has been called as witness. When Lord Hadleigh sees her on the witness stand he is instantly drawn to her beauty and her bravery.

END_OF_DOCUMENT_TOKEN_TO_BE_REPLACED

Bookworm has
read 14 books toward
her goal of
35 books.