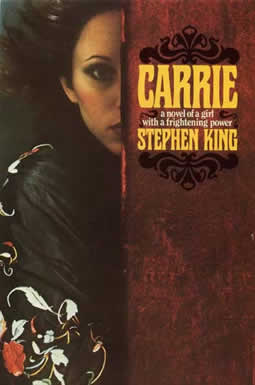 blurb:
Stephen King’s legendary debut, about a teenage outcast and the revenge she enacts on her classmates.

Carrie White may have been unfashionable and unpopular, but she had a gift. Carrie could make things move by concentrating on them. A candle would fall. A door would lock. This was her power and her sin. Then, an act of kindness, as spontaneous as the vicious taunts of her classmates, offered Carrie a chance to be a normal and go to her senior prom. But another act–of ferocious cruelty–turned her gift into a weapon of horror and destruction that her classmates would never forget.

is Stephen King’s first published book. At the heart of this dismal and terrifying epistolary novel, is a teenager named Carrietta White, who has had the odds stacked against her from day one. There are flashbacks as we read character interviews and statements about the infamous Carrie, her mother, fellow classmates and prom night.

END_OF_DOCUMENT_TOKEN_TO_BE_REPLACED

Bookworm has
read 2 books toward
her goal of
35 books.