In Los Angeles, a reporter investigating a series of murders is killed. In Chapel Hill, North Carolina, a beautiful medical intern suddenly disappears. In the sequel to Along Came a Spider,Washington D.C.’s Alex Cross is back to solve the most baffling and terrifying murder case ever. Two clever pattern killers are collaborating, cooperating, competing-and they are working coast to coast.

After having read and really enjoyed Along Came a Spider I knew I had to read the second in the Alex Cross series. Kiss the Girls

starts off where Along Came a Spider left off, but it is definitely a stand alone read. There are a few references to characters and occurrences from the first novel but nothing that would confuse a reader. The ending wraps up nicely while leaving room for the next installment.

At the start of Kiss the Girls

there is a serial who calls himself “Casanova” and has been abducting and torturing beautiful and successful young women in their early twenties. Alex Cross is a Washington, D.C. homicide investigator and forensic psychologist who has been called to go to South Carolina with his partner to the scene of the latest murder by Casanova. This is the third victim. Cross has also just been notified that his niece Naomi Cross is missing. He fears Casanova has taken her.

As the story flows, the detectives realize there are two killers working together and that this spree has been going on for over a decade. Casanova has a partner, The Gentleman. What ensues is a thrilling cat and mouse chase with twists and turns as the detectives try to find the missing women and the case hits close to home for Cross as he tries to find his niece.

Okay, so how terrifying are the serial killers James Patterson creates? Yikes. I thought Soneji from book 1 was creepy, the killers here are stone cold terrifying. Kiss the Girls

had me on the edge of my seat with my heart pounding during the abductions and chase scenes. I don’t know how I am going to get back to my other books, I can’t stop reading this series.

That was shy he was so special, so different. It was what separated him from all the other one-dimensional killers and butchers he had ever heard or read about, and he had read everything on the subject. He could feel everything. He could love. He knew that.
p.51, Kiss the Girls by James Patterson

Casanova sent chills up my spine as did The Gentleman. What makes serial killers so terrifying is that they really exist and do things like this so reading about them is really scary. As I am finding is common with a Patterson novel there were twists and turns here, heart wrenching drama and a fast paced story-line. I enjoyed every page. I wish I hadn’t seen the movie first because I knew what was coming.

All throughout the book Cross is trying to catch the killers but hoping each victim he finds is not his niece. The author takes you right along side the detectives as they try to put the clues together. Cross is a well fleshed out character and has quickly become a favorite.

For me, there’s nothing like my family, nothing even close. I imagine that’s part of why I do what I do. I know it is. Doctor Detective Cross.
p.440, Kiss the Girls

Also, AS IF it wasn’t cool enough that James Patterson re-tweeted me, this past week he reposted my instagram post of Kiss the Girls.

I described the plot in emojis on my Instagram and that grabbed his attention enough to re-post. 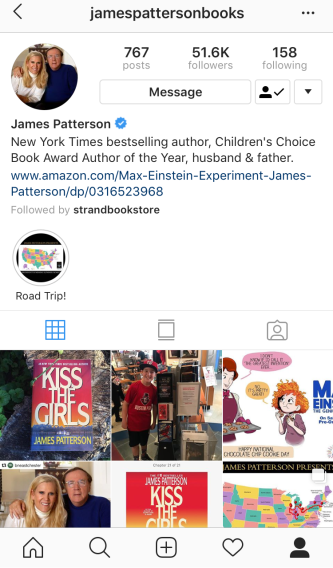 James Patterson is the world’s bestselling author, best known for his many enduring fictional characters and series, including Alex Cross, the Women’s Murder Club, Michael Bennett, Maximum Ride, Middle School, I Funny, and Jacky Ha-Ha. Patterson’s writing career is characterized by a single mission: to prove to everyone, from children to adults, that there is no such thing as a person who “doesn’t like to read,” only people who haven’t found the right book. He’s given over a million books to schoolkids and over forty million dollars to support education, and endowed over five thousand college scholarships for teachers.  He writes full-time and lives in Florida with his family. Learn more at jamespatterson.com. -quoted from Amazon.com

disclaimer: This review is my honest opinion. I did not receive any kind of compensation for reading and reviewing this book. I am under no obligation to write a positive review. I purchased my copy of Kiss the Girls

Some of the links in the post are affiliate links. If you click on the link and purchase the item, I will receive a small affiliate commission. The pictures in this post are my own and not to be removed.