Hallowed Ground: The Mystery of the African Fairy Circles

This magical story is inspired by the most haunting and least explored country in the world – Namibia – with its foggy Skeleton Coast, buried goldmines, shocking secrets and awe-inspiring sand dunes.

Spread across the face of its deserts are hundreds of miles of ‘fairy circles’ : vast enough to be seen from space.  They grow and die with the same lifespan as humans, yet no-one has been able to explain why or how they appear.

Then one day, three teenagers and their families arrive from different parts of the globe. Helped by bushmen, the buried possessions of a Victorian explorer, and a golden leopard, they solve the mystery of the African Circles. What will be discovered beneath the hallowed ground? And how will it change the future of the planet above it?

my thoughts:
Hallowed Ground by Paul Twivy is a story about 4 teens who meet at boarding school in Africa called the Augustineum and who are intrigued by the mysterious African Fairy Circles. Freddie, Hannah, Joe and Selima become easy friends while at the school. When they discover historic journals the kids believe there might be clues inside that will help them learn the truth about the fairy circles. They’ve been told the legend of the Golden Leopard, which claims that is how the circles originated but the kids now there has to be more to it than old fairytales and they want to see for themselves.

Hallowed Ground  was an entertaining and interesting YA adventure read. I’m big on settings and the author takes you right to Africa. I felt as if I were walking there and taking in the sights and sounds. I googled while reading and the fairy circles are a real thing, I had not heard of them before.

The characters were like-able and I liked that not only do we see the kids interacting but their relationships with their parents is shown as well. The story has themes of acceptance, diversity, friendship, conservation, culture and history with a fantastic African backdrop. I enjoyed this one. I could tell the author has a special spot in his heart for Africa and the history there and that shines right through in his work.

“Selima’s house was modest but characterful, built in the 1970’s by South African architects: during the Apartheid era and before Namibian independence. Darius had liked the fact that it was built by South Africans given his ancestry. “- 41% Kindle version, Hallowed Ground by Paul Twivy

“In order to maximize their trip, Ilana had suggested that they see the southern part of the Skeleton Coast-the Dorob National Park and its famous seal colony-before heading south down the gravel, coastal road to Swakopmund. They drove through the Namib, the oldest desert on Earth, which, because of the miraculous inventiveness of Nature, still managed to sustain extraordinary plants and wildlife”- 37% Kindle version, Hallowed Ground by Paul Twivy

Special thanks to Rachels Random Resources. for my review copy. Hallowed Ground by Paul Twivy is on virtual tour. 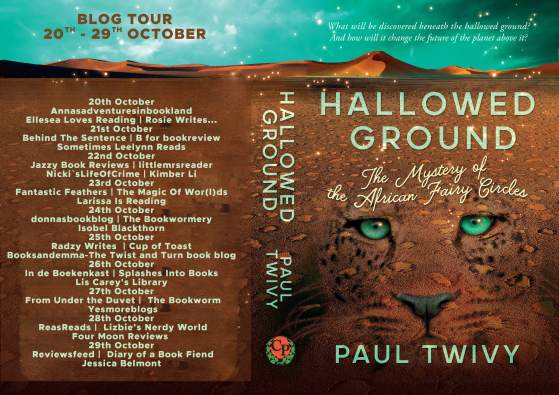 Author Bio–
Paul Twivy studied English at Oxford University and became one of the most famous British admen. He has written comedy and drama for the stage and radio.  He edited the bestseller Change the World for a Fiver. He is married with five children. He was inspired to write Hallowed Ground by his first-hand experiences of the extraordinary landscapes and culture of Namibia.
author links: www.thefairycircles.com and https://hallowedground.co.uk,
https://twitter.com/paultwivy

++++++++++++++++++++++++++++
Disclaimer: This review is my honest opinion. I did not receive any kind of compensation for reading and reviewing this book. I am under no obligation to write a positive review. My review copy of Hallowed Ground by Paul Twivy was provided by Rachels Random Resources.

Nothing on these pages is available for download without my express consent. My reviews are my honest thoughts and opinions. I am under no obligation to write positive reviews. The photos on these pages are all my own unless otherwise stated.
Loading Comments...
Comment
×
%d bloggers like this: