Skip to content
HomeListen to Me by Hannah Pittard 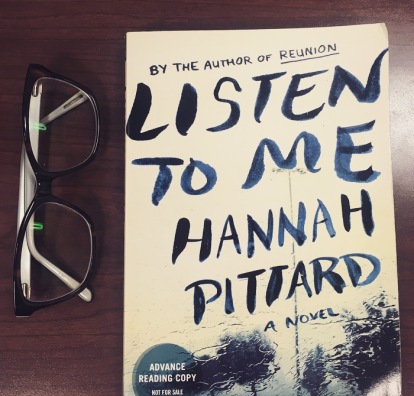 source: free copy via AmazonVine
title: Listen to Me

A modern gothic about a marriage and road trip gone hauntingly awry.

Mark and Maggie’s annual drive east to visit family has gotten off to a rocky start. By the time they’re on the road, it’s late, a storm is brewing, and they are no longer speaking to one another. Adding to the stress, Maggie — recently mugged at gunpoint — is lately not herself, and Mark is at a loss about what to make of the stranger he calls his wife. When they are forced to stop for the night at a remote inn, completely without power, Maggie’s paranoia reaches an all-time and terrifying high. But when Mark finds himself threatened in a dark parking lot, it’s Maggie who takes control.

My Thoughts:
Okay, so I am upset. When I grabbed a copy of Listen to Me I expected a thrilling story, one I could enjoy on a cool Fall evening while sipping a cup of tea. What I discovered was that I wanted to throw the book across the room when I was done reading.

On one hand this was a quiet, tense story about a married couple who are beginning to doubt one another. On the other hand, I found this book to be falsely marketed, the blurb is misleading: “When they are forced to stop for the night at a remote inn, completely without power, Maggie’s paranoia reaches an all-time and terrifying high. But when Mark finds himself threatened in a dark parking lot, it’s Maggie who takes control.” This one is supposed to be a psychological thriller, I found nothing really thrilling about it and was upset with the turn the book took towards the end. It certainly is not a “modern gothic” as the blurb suggests. Come on people.

Maggie was recently robbed at gunpoint and is suffering post traumatic stress over the event. Mark, a college professor, decides to take their annual drive to his parents farm in Virginia earlier than usual this year in hopes of getting Maggie some much needed rest and relaxation.

As they begin their road trip, with their dog Gerome in tow, a storm approaches and they need to stay at a motel for the night. So begins the search for vacancies on the road.
The POV’s change from Maggie to Mark and the reader gets some insight into what each is thinking. Maggie is is suffering from paranoia and as her inner monologue is fraught with tense, irrational thoughts. It makes her a good unreliable narrator. She is sure Mark is having an affair, she thinks she sees and hears things that may or may not be there.

Mark is walking on eggshells, trying not to upset Maggie’s fragile state but you also begin to see him doubt his marriage. He notices the change in her since the robbery and although he feels guilty about it, his thoughts are not always on Maggie.

All the while while, the weather is worsening as the couple looks for a room to sleep in for the night.

The radio went silent. There was another crack of lighting in the distance. Then there was static. Then, with no formality or warning, the radio issued several long low beeps. A tornado watch was underway in southeast Ohio.
p.56, Listen to Me by Hannah Pittard

Most of the storyline takes place on the road trip and a good chunk of the book was about these two having marital issues.
I didn’t really get a sense of dread here and I kept waiting for it. If this had been marketed as a book about a married couple with issues including PSTD on the wife’s behalf, who are trying to find a hotel room to wait a storm out for the night, then I would not have felt so duped.
What really frustrated me was that the writing was actually good and I felt as if the book could have taken a different turn at the end. Instead, something happened that had me skimming through one scene and the last few pages as well.

What she realized at this moment; her greatest fear-well, her greatest intellectual fear-was of being left behind emotionally. Of being the one caught in that terrible limbo of still being in love when the other person has already left the room.
p.148

You can highlight the text below if you want to know what happened that upset me so much. It is a spoiler.
highlight
Although not mentioned anywhere in the blurb, the couple’s dog Gerome comes along on their road trip. What happens when Mark is “threatened in a dark parking lot” as the blurb reads, is that Gerome is purposely hit by a car. Since Maggie is a vet she has a kit she carries with her and she has the two syringes necessary to put Gerome to sleep. Which she does, in detail. Thank you for the stab in the heart with no warning. I won’t read books where animals are put down, die, or harmed etc. due to my own personal experiences with this and I was just upset to see this thrown in here that way.
end of highlight

So, that sums up my thoughts on Listen to Me. I mean I know you can’t really warn the reader too much beforehand without giving the story away, but damn. Was that really necessary?

About the author:
Hannah Pittard is the author of four novels, including two forthcoming from Houghton Mifflin Harcourt: LISTEN TO ME (July 5, 2016) and ATLANTA, 1962 (fall 2017). Her second novel, REUNION, was named a Millions’ Most Anticipated Book, a Chicago Tribune Editor’s Choice, a BuzzFeed Top-5 Great Book, a Best New Book by People Magazine, a Top-10 Read by Bustle Magazine and LibraryReads, a Must-Read by TimeOut Chicago, and a Hot New Novel by Good Housekeeping. Her debut, THE FATES WILL FIND THEIR WAY, was an Oprah Magazine selection, an Indie Next pick, a Powell’s Indiespendible Book Club Pick, and a “best of” selection by The Guardian, The Chicago Tribune, Details Magazine, The Kansas City Star, Chicago Magazine, Chicago Reader, and Hudson Booksellers. She is the winner of the 2006 Amanda Davis Highwire Fiction Award, a MacDowell Colony Fellow, and a consulting editor for Narrative Magazine. She teaches creative writing at the University of Kentucky. http://www.hannahpittard.com @hannahpittard

++++++++++++++++++++++++++++++++++++
Disclaimer: This review is my honest opinion. I did not receive any kind of compensation for reading and reviewing this book. I am under no obligation to write a positive review. I obtained my free review copy of Listen to Me by Hannah Pittard via AmazonVine. Nothing in this post is available for download, the book photo is my own.

12 thoughts on “Listen to Me by Hannah Pittard”

Bookworm has
read 11 books toward
her goal of
30 books.